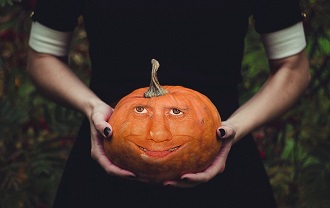 Have you ever wondered where the origin of Halloween and its customs come from? While we typically associate October 31st as a day of tricks, treats and costumes, the holiday actually dates back to 2,000 years ago.

Originating as an ancient Celtic festival known as Samhain, the festival included bonfires and costumes as a way to ward off ghosts. The Celts lived in the area that is now Ireland, the United Kingdom and northern France. Their new year was on November 1st, which marked the end of the harvest and the beginning of the cold and dark winter months, which was a season when many did not survive. The start of the new year was associated with death and disease.

As a result, Celts believed that on the night prior (October 31st), the worlds between the living and the dead were blurred and that ghosts came back to earth to haunt the living. Samhain used bonfires and costumes to help ward these spirits off.

Halloween continued to evolve from a harvest festival to ward off ghosts to a celebration with pumpkin carving and trick-or-treating. By the late 1800s, emigration from Ireland was heightened and the European traditions found their presence in North America.

Along with the tradition of Halloween, the Irish also gave us the tradition of carving pumpkins. As legend has it, Jack O’Lantern (aka Stingy Jack) was a trickster, playing tricks on just about anyone and everyone. One day, Jack even tricked Satan into climbing an apple tree. Once at the top, Jack placed crosses around the base of the tree, knowing the Devil would be unable to touch them and inevitably be stuck. As Satan remained at the top of the tree, Jack made him promise to leave his soul alone for all eternity. In return, Jack would let him out of the tree by removing the crosses.

Years later when Jack died, he was not permitted to enter heaven due to his tricks while on earth. When sent to hell, the Devil kept his promise of not taking his soul and would not let him enter. With nowhere to go, Jack was stuck in darkness between heaven and hell. Scared about his fate, he asked the Devil for some light to see his way out. Tossing him an ember from the flames of hell, Jack took a turnip, carved it and placed the ember inside to help him light his way... and so the tradition began of carving turnips on Halloween.

This eventually transitioned to pumpkins once the Irish arrived in America. They discovered pumpkins were larger and easier to carve and so the tradition of turnip carving quickly became pumpkins.

The largest pumpkin on record comes from a Belgian grower. In 2016, the Belgian man set a world record with a pumpkin weighing nearly 2,625 pounds – that’s over a ton! The event took place at the annual Giant Pumpkin European Championship in Ludwigsburg, Germany. The previous record was an astounding 2,323 pounds, set in 2014.

While many monsters and lore are now associated with Halloween – for example, don’t break a mirror or step on a crack (or fear breaking your mother’s back) – but how did black cats ever become associated as being evil? It dates back to the Middle Ages when people believed that witches hid their identity by turning themselves into black cats.